New NHTSA Data Highlights the Importance of Buckling Up 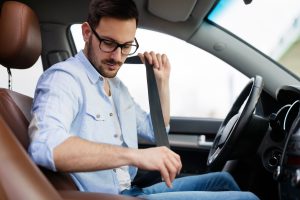 The National Highway Traffic Safety Administration (NHTSA) recently released traffic fatality data for 2017. The new data shows that car crash fatalities declined by nearly two percent between 2016 and 2017. After two consecutive years of increased fatalities, this is great news. However, NHTSA also notes that seat belt use remained virtually unchanged from 2016 to 2017, actually declining slightly over the year.

Out of occupants who were fatally injured in 2017 vehicle crashes, nearly half were unrestrained. According to NHTSA, buckling up could reduce your risk of an injury by 50 to 65 percent depending on vehicle type.

Why Should I Wear a Seat Belt?

In the event of an impact, seat belts keep passengers pressed into their seats. This could prevent an occupant from being thrown from their seat and being injured by an airbag, the vehicle’s interior, colliding with another passenger or vehicle ejection.

What Is California’s Seat Belt Law?

In California, every occupant in a passenger vehicle must wear a seat belt. If a passenger is 8 years old or younger, depending on height, they should be restrained in a safety seat.

California’s seat belt law is a primary enforcement law. This means that if a law enforcement officer notices that you or one of your passengers is not wearing a seat belt, you could be pulled over and given a citation.

For passengers under the age of 16, it is their parents’ responsibility to make sure that they are properly buckled up. However, if parents are not in the vehicle, it is the driver’s responsibility.

Tips to Buckle Up

Many vehicles have alarms to remind passengers to buckle up. Once the seat belts have been fastened, the alarm will shut off. However, not every vehicle has this feature. If you cannot get into the habit of wearing a seat belt, think about how you remind yourself of other things so you don’t forget them. You could leave a note for yourself on the dashboard as a reminder to buckle up. You could set goals for yourself. For example, you could make a goal to buckle up as soon as you get into the car every day for a month. Tell your frequent passengers about your goals and ask them to help hold you accountable.

Dudek Law Firm APC represents clients in San Diego who have been injured in a variety of personal injury cases. If you have been injured in an accident and have questions or concerns regarding your legal rights under California law, call our firm at (858) 530-4800 or reach out to us online to schedule a free consultation.