Posted on August 15, 2016 by bonnicilawgroup 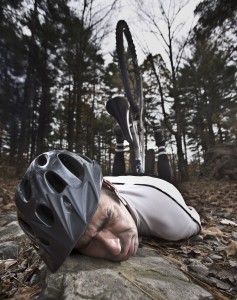 Much has been made about the venue for the 2016 Olympics, particularly about just how safe, or unsafe, it is for the athletes participating. The Rio Olympic cycling courses are now causing almost as much concern as the natural water.

After the men’s cycling events resulted in a number of injuries, including broken bones, road rash, and deep cuts, many had hoped the women’s events would be smoother. It seemed that those people would get their wish at first, but then it happened. Annemiek van Vleuten was coming down the final stretch of Vista Chinesa when she lost control of her bike and crashed hard onto the curb.

Videos of the bicycle accident have gone viral, and it is nearly impossible not to have seen footage somewhere in your Facebook feed. Anyone who has seen the crash has shuddered and likely was extremely concerned for her well-being.

After the crash, Vleuten stay motionless on the ground, where she did not move, even after paramedics arrived on the scene and began treating her. She was quickly taken to a hospital in Rio de Janeiro. There, she was diagnosed with three broken ribs, a concussion, and multiple spine fractures. However, it seems that she is okay. She even took to social media after the incident to assure her fans that she was recovering.

The crash goes to show that even professional, Olympic athletes are not invulnerable to bicycle accidents. Bike crashes can leave riders with serious injuries, even without a car being involved. It’s important to always keep your bike safety lessons in the back of your mind while riding. Even the slightest slip-up can land you in the hospital.

San Diego bicycle accident lawyer Bonnici Law Group is an avid cyclist himself, and is proud to help his fellow riders after a bicycle accident. You have enough to worry about. Let us handle the legal issue so that you can focus on recovery, and getting back on the bike.