Posted on November 6, 2017 by bonnicilawgroup 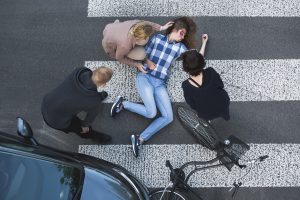 Three bicyclists in Danville were recently involved in a pair of hit-and-run crashes that left two seriously injured. The first accident happened in the afternoon, when a Ford Escape struck a cyclist on Diablo Road. The Escape fled the scene of the accident and the cyclist was not seriously injured. Around 40 minutes later, two cyclists riding on Diablo were hit by a Ford Escape. One was taken to the hospital via helicopter and the other by ambulance. The driver fled the scene.

Are the two connected? Similar locations – similar vehicle – and both hit-and-runs. Did the same driver have two accidents in short succession, or were these cyclists targeted by the same person? A local resident cast doubt that the driver could not see the cyclists, pointing out that Diablo is a straight away where the sun would not have been an issue in the afternoon. Another neighbor said it was only a matter of time before a cyclist was hit due to the narrow width of the road.

In California, it is a crime to leave the scene of an accident involving property damage or injury without providing contact information, regardless of who is at fault.

If you suffer injury in a hit-and-run accident, you may be unsure how you are going to seek damages for your injuries. The best way to answer this question is to gather as much evidence as you possibly can. Witness statements and contact info, pictures of your injuries and vehicle damage and if possible, the make, model and license plate number of the offending vehicle are all valuable tools to help police find the perpetrator. You should also write down the time and location of the accident. Call the police immediately and seek medical attention, even if you do not believe you are seriously harmed. Some injuries, like traumatic brain injury, may not manifest symptoms right away.

If you have been involved in a bicycle accident, you must act quickly. There is a two-year statute of limitations on filing a personal injury lawsuit in California. Speak to our attorneys to get the process started.